The Ahrens family has served the community of West Palm Beach in the construction industry since 1902. We pride ourselves on our commitment to family and community to always provide high quality design-build and general contracting services to private clients and government agencies in Florida.

Frank F. Ahrens Sets His Sights on the South. We at Ahrens Companies are proud of continuing a family tradition that has spanned over 90 years, with a reputation built on honesty, reliability and creative yet cost-conscious design and construction.

Our story actually begins in 1900 with George W. Ahrens and his son Frank F. Ahrens.  While living in Philadelphia, Pennsylvania, at the age of 19 Frank was working with his father in a sheet metal shop in Camden, New Jersey.  Frank was very interested in the potential of South Florida and the exploits of Henry Morrison Flagler.  He finally decided to say good bye to his father and set his sights on the South.  Frank went to the local train station and purchased a ticket to the end of the line on Flagler’s Florida East Coast Railroad, which happened to be West Palm Beach.

Ahrens and Son is Formed

Starting with just ten dollars in his pocket, Frank worked as a plumber until 1902 when his father, George decided to move South as well and reunite with his son.  George purchased two parcels of land on Okeechobee Road for fifty dollars each.  Several months later, he sold both parcels for one hundred and fifty dollars each which funded the formation of Ahrens and Son Roofing, Sheet Metal and Ornamental Ironworks.

At this point in time, Ahrens and Son was the only roofing and sheet metal company in South Florida.  Their services included roofing, re-roofing, the design and construction of ornamental wrought iron chandeliers.  The following is a list of some of their major projects:

Their first shop was located in the back of the Palm Beach Mercantile Company on Clematis Street, from 1902 through 1905.  In 1906, they moved to the Arcade Building on 1st Street, where they resided until 1910 when they built a new, larger facility across the street where they remained until 1924.

Due to their growing reputation around town, their services were in great demand and once again George and Frank were in need of larger accommodations.  They moved the facility to 911 South Dixie Highway, where the business would remain until 1974.  In 1929, Frank Ahrens sold the original roofing and sheet metal company and established two new businesses named Roofing and Sheet Metal Supply Company (later named Ahrens Materials in 1947) and Service Iron Works.  The roofing and sheet metal company sold just about everything necessary for roofing jobs including roofing materials, tiles, galvanized sheets, angle iron, insulation, nails, etc.  Service Iron Works was basically a general machine shop and structural steel fabricator specializing in dredge equipment repair, lathe work, agricultural irrigation pumps, the design and manufacturing of structural steel and bar joists.  Service Iron Works was actually the first company in Florida to have a wiggle bender, which is required for the manufacturing of bar joists.

In 1940, Frank and an associate invented and patented the first hurricane clip, which was sold by the truck loads overseas and used to erect many of the Quonset huts during World War II.  In 1946, Frank helped develop and patent the B & A Masonry Drill, which was the first carbon-tipped masonry drill in the world.  Although Frank sold his interest in this company in 1956, the company is still in existence.

In 1947, Roofing and Sheet Metal Supply Company changed its name to Ahrens Materials.  At this point, Frank was semi-retired and his sons, Charles R. Ahrens and Frank F. Ahrens Jr. took over control of the company.  Ahrens Materials functioned in basically the same manner as the old supply company, however it broadened the range and variety of materials.  Service Iron Works was still prospering at this time, and Ahrens Materials remained in existence until 1969.

A New Ahrens and Son

In 1969, Charles Ahrens and his son Richard formed Ahrens and Son, Inc.  This company was a general contracting firm that specialized in designing and building conventional and pre-engineered building systems.

Since 1990, Charles retired and Richard and Judy Ahrens continue what is now called Ahrens Companies.

We recently completed a pre-engineered plant addition for W.R. Bonsal which happens to be the tallest pre-engineered building system by United Structures of America, Inc. in North America, which houses aggregate silos used in the making of cement products nationwide. They have twelve silos holding 150,000 lbs./silo aggregate with the base at 70′ from grade and 120′ height.

From our family to yours, Ahrens Companies would like you to join our ever-growing family of satisfied customers. 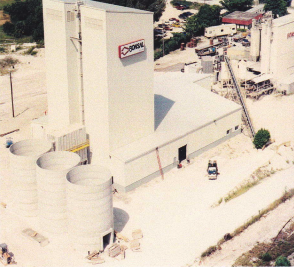 Celebrating 30 years in business as a design-build firm. This year also marks the Ahrens family legacy of 120 years in the construction industry of South Florida.